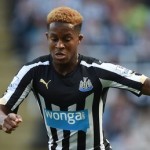 Reports are out claiming that Arsenal and Liverpool are eyeing Newcastle United contract rebel Rolando Aarons.

The Sunday Mirror reported that Aarons, aged 19, has only a year left on his contract, but the Magpies are confident he will agree a new deal.

It is understood no further talks are planned until the summer, but that will re-alert Manchester City, as well as their top-of-the-table rivals Arsenal and Liverpool.

Aarons, who has been hit by injury, is expected to come back into contention for the derby clash with Sunderland on Wearside a week today. Theo Walcott Thrilled To Give Something Back To Arsenal Fans