Reports are out claiming that Sevilla defender Federico Fazio is attracting interest from Liverpool and Arsenal. 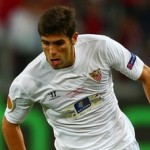 Sevilla are keen to hold on to their first choice centre-back and will only let him leave the Ramon Sanchez Pizjuan if a club offers them £8m.

The Europa league winners have offered the Argentine international a new bumper contract, but Fazio is yet to commit his future to the club.