Interesting transfer news are out claiming that Vancouver Whitecaps superkid Kekuta Manneh is on the radar of Premier League clubs. 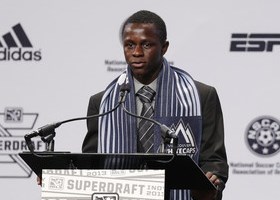 The Daily Star reported that the 18 year old delivered another nudge to Liverpool, Chelsea and Arsenal after becoming the youngest player to score an MLS hat-trick.

Manneh netted a classy treble for the Vancouver Whitecaps in their 4-1 win over Seattle Sounders yesterday.

He spent a week with Chelsea back in 2010 and Arsenal scouts were sent out to the States to watch him in 2011.

Liverpool gave him the opportunity to train on Merseyside and they were linked with a switch for him over the summer.

Sir Alex Ferguson Not Ready To Write Off Chelsea, Arsenal