It has been reported that Arsenal and Liverpool are monitoring Javier Manquillo’s situation with Atletico Madrid. 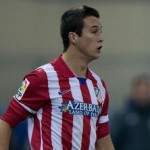 The Daily Express reported that Marseille believed they had a deal in place to take the 20-year-old on loan with an option to make the move permanent at the end of the season.

But reports of Arsenal’s interest has put the move on ice, with the player reportedly keen on a move to England.

Liverpool were also linked with Manquillo last month when talks over a move to OM had kicked off.

Wojciech Szczesny Eager To End His Career With Arsenal