It has been reported that Karim Benzema is unsure of staying with Real Madrid long-term. 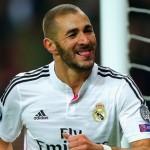 The Daily Star Sunday claims that sources in France reports that the striker, signed by Madrid in July 2009, is unhappy about Florentino Perez’s pursuit of Luis Suarez before the former Liverpool star joined Barcelona.

And despite scoring 24 goals last season and 11 in the current campaign so far, the 26-year-old is still unsure whether Madrid see him as their long-term option.

The former Lyon forward fears the Champions League holders could move for another striker in January, with them being heavily linked to Manchester City’s Sergio Aguero.

Liverpool re on the lookout for a striker to fill the gap left by Suarez, with £16m man Mario Balotelli failing to live up to expectations. Arsene Wenger Refuse To Give Up On Premier League Title