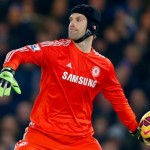 The Mirror reported that the 32-year-old, No.2 behind Thibaut Courtois at Stamford Bridge, has admitted he is ready to quit the club this summer.

That has put Arsenal and Liverpool on alert.

But PSG aim to outmanoeuvre their Premier League rivals in pursuit of the keeper after their exit from the Champions League at the hands of Barcelona.