Reports are out claiming that Arsenal are competing with Liverpool for Lyon striker Alexandre Lacazette. 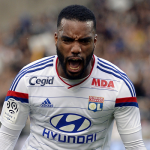 The Daily Express says French sources state the Gunners – as well as Liverpool – have held ‘secret talks’ with Lyon over a potential deal for Lacazette.

The France international – who is the top goalscorer in Ligue 1 with 20 – has also been linked with a move to defending Premier League champions Manchester City.

Lacazette penned new terms with OL at the beginning of the season.