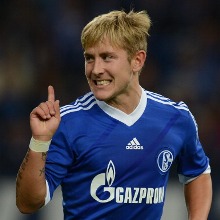 Reports are out claiming that Arsenal and Liverpool are battling for Schalke contract rebel Lewis Holtby.

The Daily Mail revealed that Arsenal and Liverpool have been given the green light to move in for Holtby after the Germany midfielder scrapped contract talks with Schalke.

After months of negotiations with Schalke’s board, the 22-year old midfielder announced his intention to quit the Bundesliga club, in a development that will alert a host of admirers headed by the Barclays Premier League pair.

Both Arsene Wenger and his Liverpool counterpart Brendan Rodgers have expressed an interest in him and will be keener than ever, now he can be snapped up for a knockdown fee next month or for nothing at the end of the season.