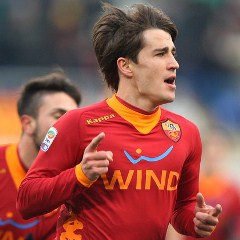 It has been revealed that Barcelona striker Bojan Krkic is attracting interest from the Premier League.

The 21 year old attacker has spent the season on-loan at AS Roma.

The player’s father Bojan senior told Blic : “At the moment he is thinking about where he will play next season. That is his priority,”.

“He is feeling great at Roma, he is happy there and he would be happy to continue playing for the Italian side.

“But there are other options. He could return to Barcelona.

“He could also move to England or Germany. There are clubs from both of those countries that are interested in my son.

“Which clubs? I can’t talk about names just yet. We will see what happens in the next few days.”

Liverpool have been a long-term suitor of Krkic, along with Arsenal.

Liverpool Given The Green Light To Approach Roberto Martinez


Steven Gerrard Unhappy With The Sacking Of Kenny Dalglish