It has been reported that FSV Mainz 05 goalkeeper Loris Karius is attracting Premier League interest. 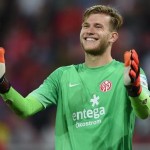 His form has attracted interest from abroad, with Arsenal, Liverpool and Benfica all in contact with Mainz about Karius’ availability, says Record.

Karius is a Germany U21 international and spent three years on the books at City.