Reports are out claiming that Arsenal and Liverpool have both been linked with a move for Borussia Dortmund winger Jakub “Kuba” B?aszczykowski. 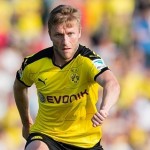 The Daily Mail is reporting Kuba could be set to leave the Bundesliga outfit, with Dortmund looking for a fee in the region of £10million for the Polish international.

The versatile 29-year-old, who is capable of playing as a full-back as well as further up the park, has not featured in any of Dortmund’s Bundesliga fixtures so far this campaign, leading to speculation he is out of favour of at the club.