It has been reported that Liverpool are chasing Fiorentina winger Juan Cuadrado. 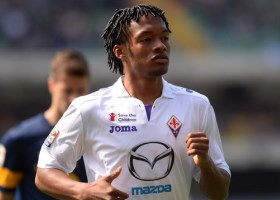 The Daily Star claims that the 25-year-old Colombia winger is rated at £20m and has been watched by a host of top clubs across Europe.

Arsenal and Tottenham have both made enquiries about Cuadrado, who has also been watched by Manchester United boss David Moyes.

Sources close to the player insist the Premier League is his preferred destination, and that Liverpool are currently leading the way to sign him.