Sensational transfer news are out claiming that Liverpool and Arsenal are being linked with a shock move for unsettled Fulham striker Dimitar Berbatov. 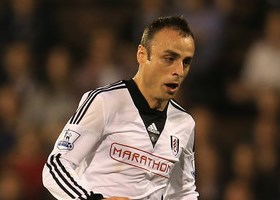 The Daily Star claims that the former Manchester United striker wants to leave Fulham for another Premier League club in January.

It is said that Kenny Dalglish wanted to bring the 32 year old Bulgarian to Liverpool last year but the move petered out when the Scot was axed.

However, he’s now back at Anfield as a non-executive director knowing the Reds need to strengthen their strikeforce.

Daniel Sturridge had formed a formidable partnership with Luis Suarez but is now sidelined for two months with a knee injury.

Arsenal are in the market for a frontman too and Arsene Wenger admitted he once considered signing the Bulgarian.