It has been reported that Arsenal and Liverpool are going head-to-head for Olympiakos striker Kostas Mitroglou. 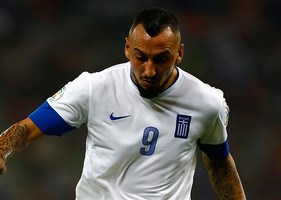 The Daily Star claims that the 25 year old Greece international has scored 14 goals in 14 games to catch the attention of Europe’s big boys.

The Gunners are looking to reinforce their striking ranks and Arsene Wenger has plenty of cash to spend in January.

Mitroglou would cost them at least £7m but the striker’s goal-getting could spark a bidding war.

Liverpool and Borussia Dortmund are keeping an eye on Mitroglou too, according to sources on the continent.