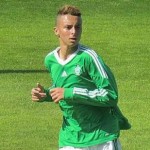 Reports are out claiming that Liverpool and Arsenal are watching Saint Etienne prospect Rayan Souici.

Foot Mercato reported that the 17 year-old midfielder is yet to sign pro forms with Saint Etienne, so leaving him free to leave for abroad.

Souici insists his priority is to stay with Les Verts, but with no deal yet signed there is concern he will cross the Channel this summer.

Should Souici leave for England, Saint-Etienne will be due little more than a training fee for the talented midfielder.

Both Liverpool and Arsenal are in talks with Souici’s family about the prospect of moving to England this summer.

Bacary Sagna : I Am Very Happy At Arsenal!