Reports are out claiming that Arsenal and Liverpool are chasing Swansea City striker Wilfried Bony. 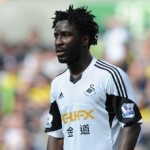 The 25 year old’s great from has attracted interest from clubs all around Europe including Premier League big boys Arsenal and Liverpool, says the Daily Star.

The Ivory Coast international even netted against both of his potential new employees.

The Gunners and the Reds are keen to bolster their attacking options as they prepare to mount stronger challenges for the Premier League.