It has been reported that Liverpool and Arsenal are waiting for the green light from Swansea City to move for Wilfried Bony. 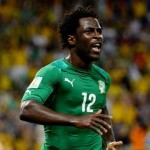 The Daily Star reported that Liverpool and Arsenal are tracking the movement of Bony after his agent stated the Ivorian’s desire to play at a top-six club.

Bony will be heading home from the World Cup in the coming days after the Ivory Coast’s dramatic exit from the competition against Greece last night.

The Swans are expected to sign Bafetimbi Gomis from Lyon which could pave the way for Bony to leave the club. Wojciech Szczesny Wants To End His Career With Arsenal