It has been reported that Fabian Delph’s new deal with Aston Villa won’t put off Premier League suitors. 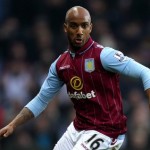 The Express & Star claims that Villa may still receive transfer interest in Delph, despite him signing a new four-and-a-half year contract.

That hasn’t deterred Tottenham, Liverpool or Arsenal, who are all prepared to come in for the 25-year-old with a big-money cash offer.

For his part, Delph insists he couldn’t imagine walking out on the club ahead of penning news over the weekend.