It has been reported that Southampton boss Ronald Koeman is going back to Feyenoord for Jordy Clasie. 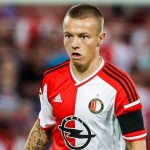 Koeman sees the Dutch international midfielder as a long-term replacement for Morgan Schneiderlin.

The Saints are resigned to losing Tottenham target Schneiderlin in the summer, even if they maintain their shock Champions League challenge.

The Mirror says Clasie admitted he was heartbroken when the Barcelona legend quit to move to St Mary’s last summer.

Koeman will face competition from Arsenal and Liverpool.