Reports are out claiming that Real Sociedad are closing on a deal for Real Madrid midfielder Asier Illarramendi. 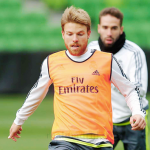 According to reports from AS, Illarramendi is close to completing his return to Real Sociedad.

The Spanish international midfielder has attracted interest from Arsenal, Liverpool, Inter Milan, Tottenham and Juventus but prefers to move back home rather than try his luck abroad.

The final details of the contract are being resolved in San Sebastián, but he will rejoin the Txuri-urdin for a fee close to €15 million.