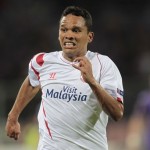 Reports have emerged claiming that the agent of Sevilla striker Carlos Bacca won’t rule out a summer move away.

The Colombia international has been linked with Liverpool, Arsenal and Tottenham among clubs abroad in recent weeks.

Agent Sergio Barila says Bacca is open to offers from other clubs.

“But first we’ll talk with Sevilla, out of respect for the club.

“I currently cannot yet say whether he goes or not, because we have to conduct interviews.”