It has been reported that Barcelona winger Isaac Cuenca has Premier League clubs hot on his trail. 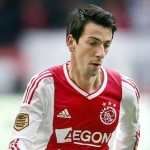 The Daily Star Sunday claims that the 23 year old has become disillusioned with his lack of first team opportunities and has suggested he will leave the Catalan giants.

Cuenca said: “I still have one year of contract left, but I do not know if I will stay. What I want is to play more.”

Liverpool and Arsenal were both linked with a move for the Spanish winger back in the January transfer window.

Tottenham are also interested in Cuenca, but with no permanent manager in place, Spurs may miss their opportunity.

Lukas Podolski Wants To Win The Premier League With Arsenal