Reports are out claiming that James Milner could quit the Premier League if he leaves Manchester City in 2015. 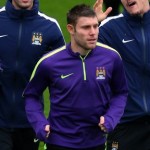 The Telegraph reported that while City boss Manuel Pellegrini is keen to retain Milner, who has been one of the club’s most influential players this season, little progress has been made on contract negotiations which started over three weeks ago.

The England international can depart the Etihad for free next summer with Premier League rivals and long-term admirers Arsenal and Liverpool both viewing him as an ideal recruit.

The 28 year old midfielder who speaks Spanish fluently has not ruled out a move abroad to widen his football experience. Discreet enquiries over his propensity to leave England have already been made by Roma and Inter Milan.