It has been reported that Manchester City are set to offer unsettled midfielder James Milner a new contract. 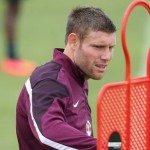 The Manchester Evening News claims that the Premier League champions are hopeful they can persuade Milner to stay despite reports that the England star is unsettled at the Etihad Stadium.

It is said that the Blues will offer him an enhanced four-year deal this summer as a reward for the player’s part in winning the Premier League and League Cup double.

But with Liverpool and Arsenal heading a list of clubs who want to sign the Yorkshireman, City may need to persuade Milner that he will play a greater role for them.