It has been reported that James Milner will look to see if he has a future at Manchester City before signing a new contract. 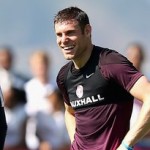 The Guardian suggests that the 28-year old midfielder, who is out of contract next summer, will try to force his way into Manuel Pellegrini’s line-up in the first half of the 2014/15 season prior to making a decision.

Milner started just 12 Premier League games last term and is looking for a drastic improvement on that if he is to commit himself to the Etihad Stadium outfit beyond the end of the next campaign.

Liverpool and Arsenal are believed to be interested in the former Aston Villa man but whether or not he departs City all depends on how much game time Pellegrini affords him during the Eastlands’ outfit title defence.