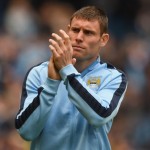 Reports are out claiming that James Milner has not ruled out staying with Manchester City.

The Daily Mail claims that the England international is considering the option of staying with Manchester City after all.

The former Aston Villa star has looked almost certain to join Liverpool in a free transfer move but has concerns with what is happening at Anfield.

His representatives have also spoken to Arsenal while there is interest from Everton, Roma, Inter Milan and clubs in Spain.

The 29-year-old has been offered an improved contract at City of around £150,000 a week but it has been about making more starts and appearing in the bigger games.