It has been reported that Real Madrid has confirmed that Karim Benzema has signed a new contract with the club. 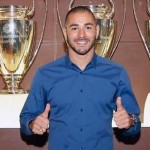 The European champions have secured the 26-year old France international striker to a new five-year deal, extending his stay at the Santiago Bernabeu until the summer of 2019.

Benzema was a reported target for both Arsenal and Liverpool during the summer transfer window but has now committed to the European champions.

The former Lyon ace arrived in Madrid in 2009 and has since scored 111 goals in 233 appearances in all competitions for Los Blancos. Luka Modric On The Brink Of Joining Real Madrid