Reports are out claiming that the agent of Lazio striker Keita Balde Diao has opened the door to a move to Inter Milan. 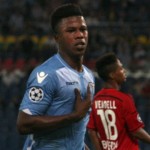 “The goal could change everything,” Ulisse Savini told Radio Sportiva.

“We had requested the transfer because a 20-year-old needs to play.

“There’s a very good relationship with Lazio we were discussing a solution that would satisfy both us and the club, the dialogue is continuous and now we will also evaluate the option of staying.

“Interest from Inter? There have been many links and a number of possibilities shared with Lazio, Inter are looking for a winger and it’s a fascinating possibility, but there are also others.

“Keita has a love for the Premier League and that is the number one target for us, but there is the passport issue.

“We are considering all the possibilities, however, is wrong to say that we want leave by force.”

The talented striker is also linked with Premier League giants Arsenal and Liverpool.