It has been reported that Everton legend Neville Southall would like to see Costa Rica World Cup star Keylor Navas in the Premier League. 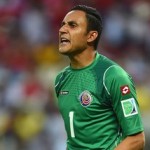 The 27 year old Levante goalkeeper has been linked with Arsenal and Liverpool.

Southall told talkSPORT: “I think looking at the Premier League now he could do [well].

“I thought he did really well [at the World Cup]. The only thing I would question was his kicking because he booted it down the middle and gave away possession I don’t know how many times last night.

“His shot stopping was good, his [claiming of] crosses were debatable, but I think he would get away with that in the Premier League, his bravery was good because he came out sliding at people’s feet and his handling was decent.

“So yeah I think he would do all right in the Premier League.”