Reports have emerged claiming that Martin Montoya is keen to leave Barcelona in January. 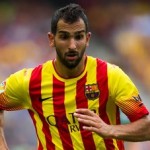 It is said that the fullback hopes to get a loan move for the second-half of the season, says TV3.

Montoya isn’t satisfied with the opportunities he’s being given by Luis Enrique, who has only picked him to play fifteen times this season.

The defender has been linked with Arsenal and Liverpool in England.

He signed an extension to his contract with Barça, tying him to the club until 30 June, 2018, earlier this year.

Aaron Ramsey Delighted To Have Thierry Henry Back At Arsenal