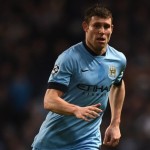 Reports have emerged claiming that Manchester City have offered James Milner a massive new deal to stay at the Etihad.

The Daily Mail reported that City have offered Milner a staggering deal worth up to £34million to stay at the club.

The England international midfielder is out of contract at the end of the season and has already drawn interest from Liverpool and Arsenal.

City, privately stung by criticism from some that they are not doing enough to retain the services of the 29-year-old, have put a four-year deal on the table with a basic salary of £135,000-a-week that can rise to £165,000 with incentives.

Officials believe the offer shows how determined they are to hold onto the popular ex-Newcastle man.