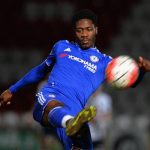 Reports are out claiming that Ola Aina is expected to leave Chelsea at the end of the season.

The Daily Mail reported that Aina, a 19-year-old defender, has rejected all offers of a new contract and is set to leave Chelsea at the end of this season, which has prompted a scramble of interest from clubs across Europe.

Arsenal and Liverpool are among the many interested in signing the England U19 international.

Rival clubs are now preying on the frustrated talent at Chelsea ahead of the summer market.