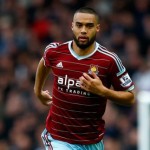 Reports are out claiming that Winston Reid has penned a new deal with West Ham United according to reports.

The Telegraph suggests that the New Zealand centre-half, 26, has signed a lengthy six-and-a-half-year deal which is worth £65,000-a-week.

Arsenal, Liverpool and Tottenham were all lining up for Reid who was set to become a free agent in the summer but it appears as though he will now remain in east London until at least 2021.