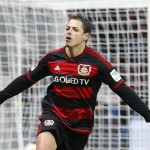 Reports are out claiming that Liverpool and Arsenal are to battle for the signing of Bayer Leverkusen striker Javier Hernandez.

The Liverpool Echo says the Bayer Leverkusen striker is on the radar of Arsene Wenger but Jurgen Klopp is also ready to make a raid.

Hernandez has been in fine form this season since permanently leaving Old Trafford and has 22 goals in 29 appearances.

Liverpool and Arsenal will both look to improve their attacks at the end of the season with the Mexico international a target.