Real Betis starlet Dani Ceballos is a transfer target for both Arsenal and Liverpool according to reports. 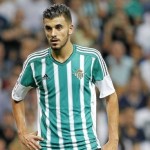 The Daily Mirror is of the belief that the Gunners and the Reds may look to get on the front foot when the January transfer window opens.

Ceballos is contracted at Betis until next summer and will be free to leave for nothing at the end of the season, indicating that the Andalusian club could offload him this winter, to avoid a scenario of getting both back for their quality nurturing job.

The Spain U21 international, who has been liked to Chelsea star Cesc Fabregas, reportedly has a buyout clause of around £7.5million.