Reports are out claiming that Liverpool and Arsenal have joined the interest for Benfica midfielder Anderson Talisca. 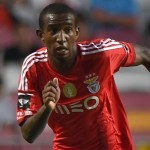 Chelsea boss Jose Mourinho has confirmed their interest in the young Brazilian, with a January bid being mooted.

However, Record claims that Chelsea face competition from Premier League rivals Liverpool and Arsenal for the midfielder.

Talisca only moved to Benfica in the summer for €4 million and the buyout clause in his contract is now set at €45 million.

Liverpool and Arsenal have been represented at the past two Benfica games with Talisca their prime target. Koscielny set for three weeks out