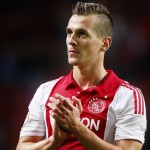 The Daily Mail reported that Liverpool, Everton and Arsenal all watched Milik when he was at Gornik Zabrze, keen to find the next Robert Lewandowski.

The 20-year-old is on loan from Bayer Leverkusen but is outstripping the statistics of Luis Suarez and Zlatan Ibrahimovic at the same age at Ajax.