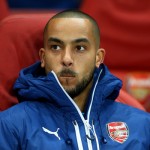 Walcott has played just four times in 2015 after a year out with a cruciate knee ligament damage and a subsequent groin problem.

Wenger said: “The first contacts have been established with the embassy! We will see how that progresses politically. Of course [a lack of playing time will have an impact].

“I want him to stay and be a regular player and fight for his place but no matter where you go if it is a big club you have to compete for your place. We went to Manchester United on Monday night – look at what they had on the bench. Look at what was sitting on the bench at Chelsea v Paris St Germain on Wednesday night. That is part of the job.

“Walcott was difficult to convince [last time] and that is why it took us much time. We started very early with him but it was slow progress. He is very quick on the pitch but off the pitch not always.”