Reports are out claiming that Arsenal boss Arsene Wenger is locked in talks with Barcelona for Cristian Tello. 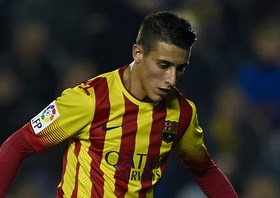 The Mirror revealed that despite denying he was in Spain last week, Wenger is also interested in signing 22-year-old Tello on loan from Barcelona for the rest of the season to give Arsenal more attacking options and pace.

Theo Walcott will miss the rest of the season after knee surgery and Tello is a very similar player to the winger.

The Spaniard’s main asset is his pace and he can play out wide or through the middle. It is unclear whether Barca will let Tello leave.