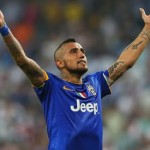 Reports are out claiming that Arsenal are in talks for Juventus midfielder Arturo Vidal.

The Daily Star Sunday says reports in Italy claim talks have already begun for Vidal who has also been linked with Manchester United and Liverpool.

The Chile international’s agent, Fernando Felicevich, recently travelled to London and only fuelled rumours a deal was on the horizon.

Liverpool have been on Vidal’s trail as a possible replacement for Steve Gerrard.