It has been reported that Arsenal are locked in talks today with PSG for midfielder Adrien Rabiot. 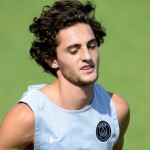 The Daily Mail claims that Arsenal are entering the decisive stages for the possible signing of midfielder Rabiot from PSG.

Arsenal have had an offer turned down already with PSG demanding £16m for a the teenager who has one year left on contract.

Veronique Rabiot, the player’s mother and agent, was due in London yesterday for discussions.