Nacho Monreal has no doubt that he has become a better player for joining Arsenal. 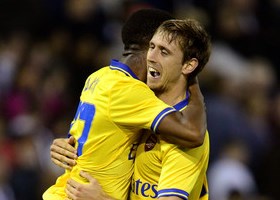 The Spanish international fullback made the move from Malaga last January.

“There was a jump in quality when I signed for Arsenal, which is an historic Premier League club.

“We want to win as much as possible and it’s true that Arsenal have helped me get in the Spain squad.”