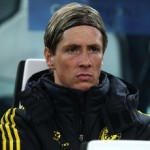 And Chelsea manager Jose Mourinho is ready to let the Spaniard leave.

The shock Gunners move comes as Blues insiders claim Mourinho considers only FIVE of the Chelsea squad are certain starters for the new season.

Spanish wizard Juan Mata and Brazil defender David Luiz are NOT among the five – and could also be waving farewell to the Premier League this summer.

But it’s news of Arsenal’s move for striker Torres – who is wanted at the Emirates along with Real Madrid star Gonzalo Higuain – that will create shockwaves.

The ambitious Gunners board are desperate for star signings after years of letting their biggest names leave.

Torres, on duty in Brazil at the Confederations Cup, is not sure if he figures in Chelsea’s plans. He will speak to Mourinho this week – and Arsenal will move fast if he gets the thumbs-down.

Their main target is still Argentinian front-man Higuain, but Torres and Wayne Rooney are on the radar .