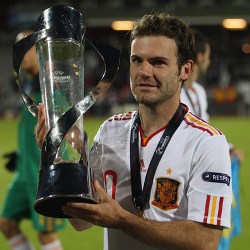 Valencia winger Juan Mata is believed to be the subject of a £15 million bid from Arsenal.

However it is understood that the 23 year old is not being groomed as a replacement for Samir Nasri.

Mata reportedly caught the eye of Arsene Wenger with his performances in La Liga and in the triumphant Under-21 side at the recent European Championships.

It is believed that Wenger hopes the Spain international’s capture is seen as a signal of intent by Nasri that the club is serious about winning silverware this season.

Valencia, meanwhile, have insisted that the player is not for sale, but Mata’s father, Juan Senior, suggested negotiations between the two clubs have begun regarding a transfer fee.

He said in the Mirror newspaper : “There have been calls from foreign clubs but now the decision rests with Valencia. [Juan] is on his holidays,”. Arsene Wenger Admits Title Race Could Go Down The Wire