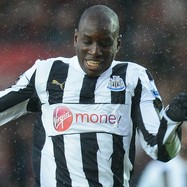 The Sun claim that the Frenchman knows he can land the Senegal striker for £7.5million due to a buy-out clause in his Newcastle United contract.

It is said that Wenger is desperate for a proven Premier League striker after selling Dutch superstar Robin van Persie to Manchester United.

And he believes Ba could be the answer. Despite intense speculation last summer, no club stepped forward to trigger Ba’s clause — but Toon manager Alan Pardew revealed it will re-activate next month.