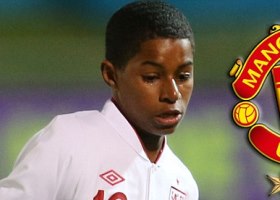 It has been reported that Manchester United are facing a hostile raid from Manchester City on youngster Marcus Rashford.

The Daily Mail claims that the attacking midfielder is one of the most highly sought after talents for his age group but United have yet to wrap up terms on a new contract.

City are particularly keen while Chelsea and Arsenal also have an interest.

United are reluctant to pay out big-money contracts and constantly risk losing some players due to greater financial incentives being offered at other clubs. >[?
Rashford is a Man United fan and is still committed to the club, but that won’t stop rivals from making legitimate offers.