It has been reported that Croatian teenager Marc Brasnic is being watched by Arsenal and Manchester City. 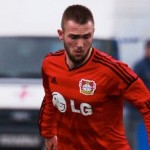 The People reported that they are battling for the signature of Brasnic this season.

The Bayer Leverkusen striker, 18, is hot property, with clubs in Italy and Spain also keen, as well as the Gunners and champions City.

His deal ends next summer – and he could go for £1.5million in January rather than leave on a free at the end of the season.