It has been reported that Leicester City defender Liam Moore is being watched by Manchester City and Arsenal. 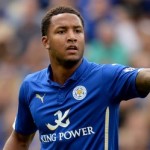 The Mirror reported that neither of the Premier League heavyweights have made a move, but both are monitoring the England Under-21 international.

Moore, 21, has been hugely impressive during Leicester’s promotion to the top flight and they tied him down to a new three-year deal in the summer.

But that may not dissuade either the Gunners or champions City from making a move after compiling their scouting reports on the 6ft 1in defender, who can play right-back and centre-half.