Reports are out claiming that Arsenal and Manchester City are interested in Sheffield United wonderkid Louis Reed. 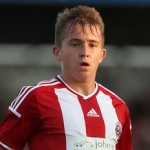 It is said that the 17 year-old could follow in the footsteps of Phil Jagielka and Kyle Walker in becoming the Blades next big thing.

He has already played five times this season and impressed in their opening day defeat to Bristol City.

Reed shows calm and composure way above his years and he was rewarded with a new three-year deal by manager Nigel Clough.

Is the youngest player ever to represent United in the Football League.