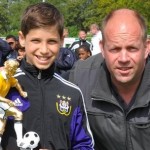 Reports are out claiming that Manchester City are in discussions with Anderlecht regarding whizkid Evangelos Patoulidis.

The Daily Mail claims that City are in talks with Anderlecht chief Roger Vanden Stock regarding the 14-year old who is one of the brightest stars to emerge from the Belgian club in recent history.

It is believed that City are looking to land the playmaker this summer but will need to pay Anderlecht a compensation fee if they want to lure him to their academy.

Patoulidis turned down a shift to Barcelona’s famed La Masia academ when he was 12 as his family wanted him to remain in Brussels to continue his studies. He has also attracted the interest of Arsenal in recent times.